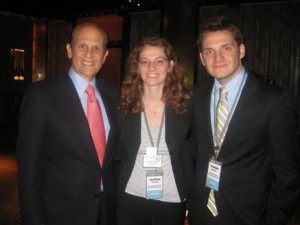 On December 14th and 15th, co-Founders Justine, Tristan and Camille Almada attended the FasterCures “Partnering for Cures” conference at the Grand Hyatt in New York, NY. FasterCures is a non-profit think tank created by Michael Milken, the financier and philanthropist, who founded the Prostate Cancer Foundation, various education and economic initiatives, and recently enrolled in Warren Buffet’s Giving Pledge. The mission of FasterCures is to accelerate medical advances and cures through innovative and collaborative approaches to drug development and medical research.

During the opening plenary session at Partnering for Cures, Mr. Milken underscored the importance of medicine in bolstering economic growth. According to the Milken Institute, half of economic growth in the 20th century came from medical advances.  Put another way, global life expectancy increased an astonishing 39 years in the last century. But in an age when many forms of technology appear to be growing at a rapid pace (a popular example is Facebook, which now interacts with 1 out of 11 people in the world), why is medical progress stagnating? And, what can we do as stakeholders to speed up the development process for medical innovation?

Speakers at the conference often touched on a stage in research and development known as the “valley of death,” where great research is lost. Some large pharmaceutical companies, for example, are reluctant to invest too early in the development pipeline, preferring to allocate capital in situations which are less risky, such as Phase II and Phase III clinical trials. On the other hand, good ideas can be lost in academia behind a wall of stringent intellectual property rules. With venture capital firms largely absent from the drug development process, there is a natural fit for venture philanthropists to help the two sides bridge the gap. For example, venture philanthropists can absorb some of the risk that the private sector, academia, or government agencies cannot afford to take.

One exemplary organization is The Multiple Myeloma Research Foundation (MMRF), started by myeloma survivor Kathy Giusti. The MMRF operates similarly to a drug development company, except it measures success in social, rather than financial, terms. While ten years ago the therapeutic pipeline for multiple myeloma was non-existent, they supported the creation of four commercially-viable drugs in four years and 15 that are in various stages of development. The astonishing success of the MMRF highlights the fact that, by using the model promoted by FasterCures, medical progress can be made for uncommon diseases which may not normally attract sufficient private capital on their own. That success encourages us in our mission of initiating research for treatments of anal cancer.

The FasterCures model forces collaboration, which includes sharing data, information, and risks as well as returns. By partnering biotech firms, pharmaceutical companies, academia, government agencies, philanthropists, and advocacy organizations such as ours, Mr. Milken believes that humanity is more likely to arrive at medical solutions than if each group worked on its own.

“When you put 800 type-A personalities in a room, special things can happen” – Michael Milken, speaking to us about FasterCures.