Home / A Reminder of Why We Are Here

A Reminder of Why We Are Here

Imagine what the world would look like without the invention of the smallpox, whooping cough, typhoid, tetanus, measles, mumps, rubella, and polio vaccines?

Immunization is widely considered one of the greatest achievements in human history. Global life expectancy was 31 years in 1900 and is 70 years now, thanks in large part to biomedical advances such as vaccines. The world has successfully and brilliantly used vaccines to control the spread of many infectious diseases—it is time we add HPV to the list.

So is the vaccine safe? Recent studies from different areas such as the United States and Scandinavia around the world continue to show the safety of the Gardasil vaccine. Both American and European scientists report that severe reactions in their respective studies were no more common in the group that received the vaccine than the control group who did not. Despite much greater administration of the vaccine in recent years, reports of adverse effects are on the decline (which may indicate those early reports were influenced by misinformation around the time of the vaccine launch). Put simply, these studies show that the HPV vaccine is a safe and effective way to prevent many of these cancers, and save lives. 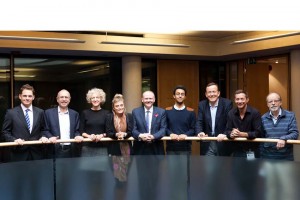 Representatives from HPVAction in October 2013

As in the US – where the Centers for Disease Control and Prevention, The American Academy of Pediatrics, the American Academy of Family Physicians, and the American College of Obstetricians and Gynecologists support universal vaccination – HPVAction's objectives are backed by the leading clinical and scientific organizations of the UK. These include the Faculty of Public Health, the Royal College of Obstetricians and Gynecologists, the Royal Society for Public Health, and the School and Public Health Nurses Foundation, as well as 150 medical health professionals.

The Almada children lost their mother Paulette to one of the very few cancers that now has a safe and effective prevention tool. She is missed every single day. Their hope is that other families do not need to experience losing someone they love, painfully and prematurely, to a cancer that has a simple vaccine.

Take a shot at cancer—vaccinate against HPV.