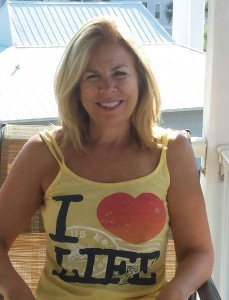 My name is Janet and this is my story.  I was living an active life working full time, going to school to finish up my MBA and enjoying my family/friends.  I was healthy and really only went to the doctor once a year to my GYN.  In February of 2010, I went for my annual checkup and saw the nurse practitioner.  I told her I was having some constipation issues.  She did a rectal exam – said, “Yes, you have hemorrhoids. Increase your fiber”.  I increased my fiber and continued on.

February of 2011 I went back for my annual exam and was once again seen by the same nurse practitioner.  I told her I was having a lot more trouble with my hemorrhoids including some pain and occasional spots of blood.  She did a rectal exam and said once again I had hemorrhoids and needed to try another over the counter suppository along with an increase in my fiber.

April of 2011, I woke one morning and was certain my bladder had prolapsed into my vagina.  I called the GYN office and the same nurse practitioner saw me again.  She said my bladder was fine, but I had a bit of a rectocele from too much stool and large hemorrhoids.  She prescribed a prescription strength suppository and dismissed me.

I suffered on another month until I was certain something was wrong with my body.  I self-referred to a colorectal surgeon.  I told him I was sorry to bother him – I knew it was just hemorrhoids, but I needed some relief.  I was only 49 so I had never had a colonoscopy (50 years old is the recommended age for screening) and he said there are treatments for hemorrhoids and I had come to the right place.

He began the rectal exam and I almost came off the table.  I started bleeding and it was clear that something was wrong.  He looked like he had seen a ghost – actually he had!  I got dressed and when he came back in to talk to me I was in a panic.  What is wrong?  Do I have cancer?  Am I like Farah Fawcett?  He said it is not a hemorrhoid and you need a colonoscopy and biopsy.  A few days later I received the colonoscopy and was handed the pictures post procedure on a Friday afternoon.  This was the longest weekend of my life.  Was it rectal cancer?  Had it spread?  Was I going to die?  How did this happen?  I cried all weekend.  I lost my mom at age 59 to pancreatic cancer and one day healthy – a diagnosis and then in a few months later dead.

Within the first few weeks of treatment I switched focus from blame and why to just surviving the brutality.  Painful bowel movements, peeing razor blades and severe fatigue were just some of the side effects.  I found a supportive website – www.blogforacure and “met” others who had survived.  It helped me get through.  People are sympathetic, but you want to talk to someone who has been there. I had a very good support system and that was a blessing.

There is no way you can put your body through this kind of treatment and not have some residual damage, but it sure beats the alternative.  We call it our “new normal” and learn to cope with our limitations and body changes.

I am over 3 years post treatment and feeling great.  I began working out and clean eating, I quit my high stress job and moved closer to my family. I even bought a beach condo which has always been on my bucket list!  I try hard to stay in the moment and enjoy each day.  Cancer changes you and you can never go back to the innocent pre-cancer state.  There will always be a fear of recurrence or developing another kind, but it does give you new appreciation of life and how fragile and short it really is.