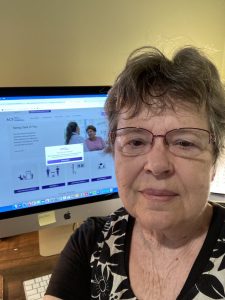 I found blood in the toilet after pooping in early 2017. I remembered my husband’s brother, now gone from bladder cancer, saying he knew something was terribly wrong when he saw blood when he urinated.

I knew in my heart I needed to take action. But my husband was being treated for lung cancer, so I kept it to myself.

My husband was quickly cured by surgery. I kept passing blood now and then. I was still stalling.

Then one day I was riding my bicycle around the neighborhood park. Every time I hit a bump, i had a literal pain in the butt.

My best advice came from within me. I chose not to comb the internet for information, leaving that to my husband. I did not need to be any more frightened than I already was. I chose to have trust in the oncologist the surgeon sent me to.

I wish I’d known a bit more about how radiology would prepare me for treatment. That I would be right side up (I had a horror of being placed butt up); what exactly making a mold of my lower body would entail; that I would get tiny tattoos. TATTOOS???

The best advice came from the medical oncology nurse who told me to stay ahead of even the slightest hint of nausea. I did and I had none. I have a horror of puking.

I feel very fortunate that my experience, while not anything I would want to repeat, was about as easy as it gets with this diagnosis and that the fallout from radiation has been, while permanent, minimal. I am now in my fifth year of clean scans.

Don’t let anyone fob you off with “it’s just a hemorrhoid.” It’s your life. Mine, I am so thankful to say, is pretty much back to normal.