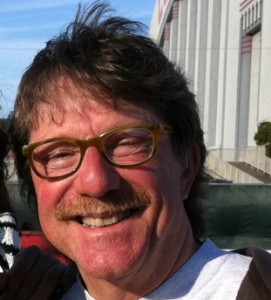 My story is not that different, I suspect, from many others in this country during the past 20 years or so. I grew up in suburban New York, and I realized that I was gay in my teens, though the 1950s and 1960s were not easy decades to be comfortable living openly as a gay young person. I, like many, was subjected to bullying and harassment. I survived those early traumas, and throughout my teens and my twenties, during the 1970s, I was sexually active. Neither I nor my doctor or friends knew that HPV existed, and the Sexually Transmitted Infections we knew about, such as gonorrhoea and syphilis, could be treated and cured relatively easily. Like so many others, I had no idea I was at risk for other viruses and diseases.

I lived in New York City after high school, where I attended University, got my degree and worked to save up money to move out to California, where I had visited and knew I wanted to live. It was so much warmer and freer there. I moved to San Francisco in 1974, initially staying with friends until I got my own footing. I decided to go back to school to study nursing and health care. It is just something that fit me well. I loved nursing school, and worked afterward in two different clinical settings, one a women’s clinic, and the other helping patients endure endoscopic procedures. Then I went back to school to get my Physician Assistant certification.

I lived with roommates and also by myself in apartments in the heart of San Francisco’s gay Castro neighborhood. It was during the heyday of the sexual liberation movement going on in this country, a very heady and celebratory time to be alive and to be gay, and San Francisco was ground zero. We just all felt so free, and happy to be able to express ourselves and live our lives openly. During this time I had been dating regularly, and had had a few steady partners, but nothing lifelong.

I loved my job as a Physician Assistant, and worked in various capacities, mostly in community primary care clinics as well as some pharmaceutical research, and HIV research. As a health care provider, as soon as news reports of a ‘mysterious illness’ among gay men started circulating in 1981, I knew instinctively it must have been caused by an infectious agent, and subsequently became very cautious and careful about my sexual activity. It just made sense to me to limit exposures, and this turned out to be true. However for me it was too late, as I’d probably already been infected with HIV before then.

Fast forward to the mid-1980’s. We all got tested for HIV at work to see whether or not the virus that causes AIDS was passing casually to health care workers. It turned out that it wasn’t being passed to health care workers, but I knew I was at risk, yet felt 100% healthy and thought “it can’t happen to me.” Then one day we were called into an exam room one by one and given our results. My blood tested positive for antibodies to HIV. This was 1985, and all we knew back then was that people were dying of AIDS within months of being diagnosed with it. I did not have an AIDS diagnosis, only HIV positive blood test. Still, I was terrified, in shock for a few months, and only after some counseling, was I able to start to tell friends. It was a scary and also incredible time to be in San Francisco as the community and City rallied to help those dying of the virus in the beginning years of the epidemic. The stigma of having HIV was and is still very real. People fear getting the virus, rightly so, but also fear the people who have the virus. Back in those years, my early feelings of shame at being gay were triggered and became enmeshed with feelings of stigma at having HIV, having contracted it sexually. These feelings still come up for me, even today.

I had been and remained very healthy for a while, with declining T-cells over the next 5 years. In autumn of 1989 I started to have rectal pain and some sciatic pain. I went to my doctor who said I had hemorrhoids and treated me for them. The pain persisted, and soon I had a discharge in my stools. He thought that I had an infection on the hemorrhoids and treated me with antibiotics. The discharge on the stool cleared up, but then reappeared once I’d finished the antibiotics. And I was still having pain.

Because the pain was still there, my doctor referred me to a proctologist and rectal surgeon who concluded that I had a peri-rectal abscess. I was admitted to the hospital to have it drained. That was the day after Christmas 1989. It seemed routine at the time and that I would go home that same day. But that’s not what happened.

After the surgery, I awoke in a hospital room, with a huge bandage around my behind. My surgeon visited me and, alone without any family or friends in the room, told me that it was not an abscess, but that he had found a tumor and that I had cancer. He specifically said I did not have AIDS. He rambled on for a while. I think he said some things about the percentage of people who survived 5 years with this type of cancer, and that I’d need treatment. I was in shock. The last words I remember him saying were that I should come to see him next week. Then he left me alone.

At the nurse’s station as the surgeon wrote his notes in my chart, a nurse read them over his shoulder and came running immediately into my room to hold me and comfort me. I was a wreck and in tears, and she hugged me and didn’t leave me alone for awhile. The experience in the hospital made me realize, even more than my professional work had, that nurses are the heart and soul of our health care system.

I had little idea what any of the information the surgeon told me meant, only that I had cancer and a huge gash. The surgeon had cut from my tailbone clear down to my anus, and had left the incision open. He’d said that he couldn’t remove the tumor because it had invaded the sphincter muscle. I went home and friends helped care for me while I waited for doctors appointments and a plan for treatment. The wound was painful. It was impossible to sit, and I needed frequent dressing changes. Soon I met my radiation-oncologist and medical-oncologist, one of which was respectively optimistic and the other which wasn’t as much, the former saying he thought he could cure me, the latter telling me to get my affairs in order.

I had to stop work immediately and go on disability. Bowel movements became a nightmare. The doctors said my wound would never heal, even if I survived the treatment. Those days and months were very dark ones for me. I felt like I had entered a dark tunnel and could not see the light at the other end. I had just turned 41.

The stigma of having a cancer 'back there' dovetailed with the stigma of having HIV and the early childhood shame of being gay: I called it the triple whammy. It was hard to talk about, and no one else really wanted to hear it. I never read about it in the news, and boy oh boy, those were hard times. I had a lot of emotional healing to do. Eventually I did begin to heal. And after a couple of years, the wound actually closed.

I never felt like my doctors knew exactly what course my cancer would take, whether I would heal or not. I personally was determined to survive. The time period during the cancer treatment was when there were no drugs to treat HIV, which was raging in my body, and my immune system was scraping bottom for many many years.

Each follow up visit with my surgeons and doctors brought huge anxiety for me, as I knew that the cancer could recur, and even spread. After each exam, I felt like I would get a huge reprieve each time the doctor said “no cancer” and “come back next month.” Eventually it became 2 months and then 3 months between visits. The wound was starting to heal.

In the following years, my gaping wound healed, but I continued to experience super-painful radiation ulcers in and around my anus for a long time. I had, and continue to have, severe sciatic pain and severe bowel dysfunction. I’ll spare you the details except to say things work, just not normally. And thank goodness for feminine hygiene products!