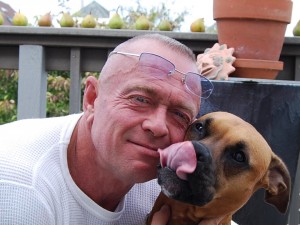 After several months of unsuccessful treatments she referred me to a colorectal surgeon.

The first surgeon I saw said he suspected it was an HPV-related tumor. I got three more opinions and they all confirmed my worst nightmare.

I was so sick at the time I chose not to take chemo and radiation. Thus the tumor came back exactly two years to the date in the very same spot.

I took my chemo treatment as a hospital inpatient and avoided having to have a port. My 30 days of radiation seem like an eternity.

The only thing that kept me going was my care from a best friend and the unconditional love I received from my dog, a service animal I named Hope.

I came to San Francisco in 2008. As fate would have it, I met a new soul mate in San Francisco and now eight years later have a beautiful family and a new chapter in my life I never expected to happen.

What you think may be a horrible ending might only be a beautiful beginning in disguise!