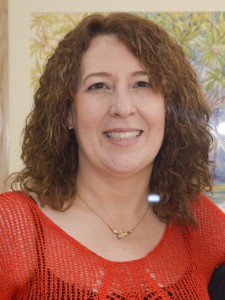 My name is Sue Dobbs, I am a 46 year-old married mum with two children aged 19 and 21. I live in Bridgend in South Wales.

I noticed that I was bleeding from my rectum in December 2010. I didn’t think much of it in the beginning; assuming it was a case of haemorrhoids I decided not to go to see the GP. The bleeding persisted and I noticed some changes in my bowel habits so eventually, after much persuasion from my family I went to see my GP. I really believed that I was wasting the GP’s time, so was very taken aback when she said “I can feel an abnormality in your rectum, I need to refer you for further investigation”.

I started a six-week combined chemo radiotherapy treatment on 27th June 2011. I found the chemotherapy easy to cope with, but had severe radiation burns, which caused me a great deal of pain and discomfort. Despite this I was determined not to be a victim to my treatment and carried on as normally as I could. The ward I stayed on for my chemotherapy treatment had a lovely sea view and this became my penthouse. We were all very positive, laughing, joking and making plans for the future. Mine was to get well for my family and friends and back to my job, which I loved as centre manager for Cats Protection Bridgend Adoption Centre.

I finished my treatment on 3rd August, and despite protests from friends and family, but with support from my GP and oncologist, I returned to work three weeks later. I just wanted to get back to normal after the seven difficult months we had all been through. My anal cancer hadn’t been my only uncertainty during this time. My father is Libyan and he and a lot of my family are living in Libya. During the Libyan uprising I was constantly worried about their welfare and it was very difficult to get news about how they were all faring. In a way this distracted me from my cancer and gave me something else to think about.

One of the things which kept me going through my treatment was an attempt for the Guinness World Record for the largest gathering of people dressed as cats. I had to put this on hold when I was diagnosed but I was determined to see this event staged. This came to fruition in June 2012 in Bridgend Town Centre. We didn’t set the record but the event was a momentous occasion for me and one which I will never forget. I also ran the 5k for Cancer Research with some of my colleagues. We called ourselves the Moggytastics and managed to raise over £1000, making the front of the local paper in the process.

My cancer is now in remission but I am suffering with side effects from the treatment including damage to my bowel, neck of my bladder and neuropathic pain affecting my back and pelvis. I am finding the pain very difficult at the moment as it is preventing me from running, horse riding and doing other activities which I enjoy. I have recently been to see a pain specialist and am very hopeful that he will be able to help me with my symptoms.

Many people tell me they can’t believe how strong I am and how well I dealt with my cancer. The truth is I feel lucky that my cancer was diagnosed early because of private health insurance. Many people I met over the course of my treatment were diagnosed at a far later stage than me, and some have been fighting cancer for years. They were the real inspiration for me and speaking to them helped me put my own cancer into perspective.

I have many plans for the future including another attempt at a Guinness World Record in August next year. I am also hoping to get fit enough to run a 10k race and most of all enjoying time spent with family and friends.