As August is Immunization Awareness Month in the US we wanted to discuss Gardasil 9, the new 9-valent HPV Vaccine that was released to the public!  Read about how it’s different, its protection, and who should get it.

On December 10, 2014, a new 9-valent vaccine was approved by the FDA in the United States.  The new Gardasil 9 vaccine is a big step forward in the race to end HPV, as it provides protection against 9 strains of the most prominent and high risk types of HPV.  This vaccine, available to both girls and boys in the US, protects against strains that cause not just HPV-related cancers, but also genital warts and multiple precancers. The advanced and expanded protection of Gardasil 9 brings us closer to eradicating HPV and 5% of cancers worldwide.

Gardasil 9 is an updated version of the previously recommended vaccine Gardasil (4-valent) which is available to both girls and boys in the United States to protect against HPV and HPV-related diseases.  In addition to its approval in the United States, this vaccine was also approved in the UK and EU by the European Commision in June 2015. Although it has been approved in the UK, Gardasil 9 has not yet been added to the National HPV Vaccine Program, as it still needs to be recommended for use by the Government’s Vaccine Advisory Committee (JCVI).

On the other hand, since its approval in the US, Gardasil 9 has been recommended by the Advisory Committee on Immunization Practices (ACIP) to be one of 3 vaccines to protect against HPV along with the previously existing Gardasil and Cervarix. This new vaccine is an important development, as it is effective for coverage of nine different strains of HPV (6, 11, 16, 18, 31, 33, 45, 52 and 58) which is five more than Gardasil and seven more than Cervarix.

There are differences between this new vaccine, Gardasil 9, and the vaccines that previously have been recommended by the FDA. The chart below can help explain the differences and the benefits that come from each vaccine.

gardasil 9: HOW IT compares 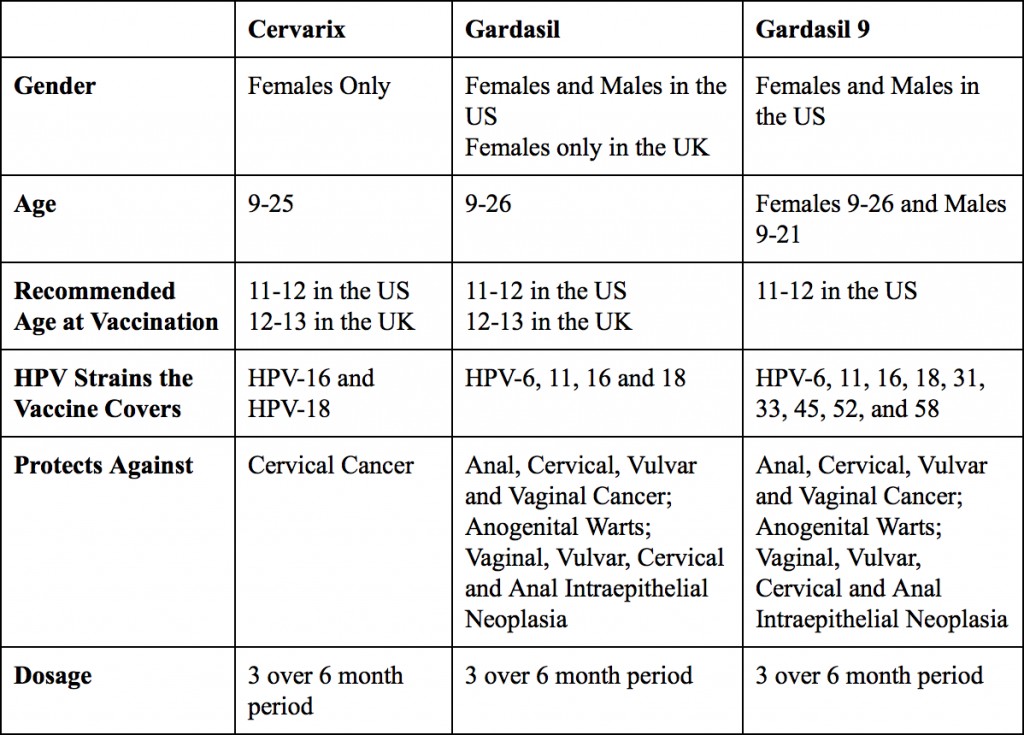 The clinical trial for Gardasil 9 involved 15,000 participants and took place over many years through a double blind randomized control trial in comparison with Gardasil.  In order to analyze and determine the effectiveness of the vaccine during the clinical trial, the antibody response to the vaccine was measured. Through this measurement, researchers were able to show that Gardasil 9 was just as effective as Gardasil (4vHPV) in protecting against diseases and cancers caused by the four HPV strains found in both vaccines (6, 11, 16, 18) as well as the additional 5 strains (31, 33, 45, 52, 58).

Gardasil 9 protects against HPV, which is a virus that is spread through intimate skin to skin contact that nearly all sexually active adults will have at some point in their lifetime. Immunization against HPV is important as the virus causes 5% of cancers worldwide including anal cancer, cervical cancer, penile cancer, vaginal cancer, vulvar cancer, and also cancers of the head and neck.  Similar to this, HPV is also associated with causing other diseases and health complications including anogenital warts and multiple precancers. Most of these HPV related cancers are caused by high risk HPV strains 16 and 18; however, high risk strains 31, 33, 45, 52, and 58 and low risk strains 6 and 11 also cause HPV related health complications.