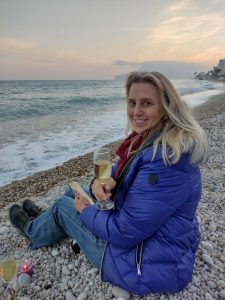 So, they did an exploratory with a Gyn doc checking all the female parts, and a colon doctor to take care of the “end.” Just before being put under, I said if anyone finds it, yell “Fire in the hole”. 24 hours later the rectal doctor called and told me he found it: a small lesion on the back wall of the anus probably growing 2 years. All I said was did you yell fire in the hole? He laughed. Then the treatment began. And it was a real fire in the hole.

30 days of radiation and 2 weeks of “5 - FU” the appropriately named chemotherapy.

I am a nurse and I was in a bad 20-year marriage. This diagnosis changed everything because it was “mets” to the lymph nodes and I knew that was bad. And to top it, my now ex-spouse was happy the day I was diagnosed despite trying to hide it—a rather evil thing to face I’m afraid.

As a nurse I knew the danger of mets; I thought I was close to my pink slip on life but I still remember one thing the oncologist said to me: Don’t read the statistics, they are only numbers. Don’t put a number on your life.

My doctors were the best and went after it. The treatment was brutal; I won't lie, burns fro stem to stern and peeing razor blades, resulting in the worst pain of my life.

Unfortunately, I’m stoic to the end, and refused to take time off work. I kept teaching a fitness class with my chemo fanny pack attached under my gym clothes even after working a 10 hr day. Not the smartest thing to do.

Long story short, I ended up in isolation with possible sepsis. My spouse arrived and never said a thing or held my hand. I prayed to God that night to save my life and I would leave a man that shamelessly hoped I wouldn’t make it. The next day my blood counts came up, and I was out of the woods. I divorced him three years later.

I am now nine years out from cancer. I’ve done nearly everything on my bucket list including publishing a small book about my mother, travelled to 20 countries, and now have hit refresh and saved enough money to move to Spain and teach English to little kids. I’m alive despite the statistics and thriving. I have long-term effects from the radiation, but the alternative is worse. I have a man that loves me and understands my “sensitive side effects” of a scarred vagina, bladder issues etc.

Do I always have good days? No, but I have more good than bad. So here I am and I’m planning to live till 103.