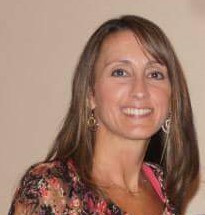 In the Spring of 2009 at the age of 41, I began telling my primary care physician that I was experiencing bleeding during bowel movements. Each time the doctor assured me that it was likely an internal hemorrhoid, and he didn’t feel it was necessary to do an exam. During my yearly gynecological exam in the summer of 2009, my gynecologist said that he felt a lump in my rectal canal. As I had struggled with GI issues most of my life, I had a regular gastroenterologist, but he was out of town on a 2-week family vacation. I made an appointment with a different gastroenterologist who was in the same clinic as my primary care physician. After the procedure, my husband was told that a small polyp was removed, which was later determined to be benign. I continued to contact my primary care physician for the next 14 months about the continued bleeding but was told each time that it was likely an internal hemorrhoid.

In the summer of 2010 during my yearly exam, my gynecologist felt the lump and it had grown substantially. He looked at the report from the gastroenterologist and found that the polyp removed was much higher in my colon. (I later found out that it is common for the nursing staff to insert the camera into the rectum and the doctor probably didn’t begin his exam until he had passed the tumor.) Within a few days, I was scheduled for another colonoscopy but this time with my regular gastroenterologist.

The doctor later told me that he knew it was cancer as soon as he saw it. The tumor was biopsied and I was scheduled to visit the doctor a couple of days later. The gastroenterologist that I had worked with for so many years told me that the biopsy had returned positive for squamous cell carcinoma. I was diagnosed with stage 2 anal cancer at the age of 42! On the very same day, I met with my surgeon, scheduled appointments with my oncologist and radiation oncologist, and did more bloodwork than I ever knew possible. My life as I knew it was about to change drastically. The worst part was having to tell our children, my parents, extended family, and friends.

My surgeon attempted to remove the tumor but was unable to get clear margins. Approximately a week later, I received my PIC line, shot of Mitomycin C, a fanny pack with a 24-hour drip of 5FU, and my first radiation treatment. All on day 1! I wore the fanny pack for a week on a constant drip, completed 6 weeks of daily radiation treatments, and wore the fanny pack on a constant drip for the final week. While the chemotherapy made me very sick, I had the opportunity to recover between weeks of the chemo drip. The radiation burns, however, were more painful than I realized possible. At times, I prayed my way through tolerating the next hour (or even 15 minutes).

Upon completion of the chemotherapy and radiation regimen, I was blessed to be declared cancer-free. I continue to live with the ongoing after-effects such as bowel disfunction, hips that have been radiated to the point of bone-on-bone, bladder challenges, pelvic floor dysfunction and Barrett’s esophagus (likely caused by nausea with chemo). Although life and my health bring constant reminders of 2010, I am thankful daily for the treatment that allowed me to be here on this earth with my family.

When I speak of the events of 2010 and the years that have followed, it feels like I am talking about someone else. I lived a very healthy lifestyle, always maintained a healthy body weight, and had been very active. I have never smoked and do not drink. With all of this considered, I always tell people to listen to your body, be aware of all changes in your body, be willing to repeatedly ask your doctor for answers (or find another doctor).

My goal for the future is to continue to take care of my body to allow the best quality of life possible so I can grow old with my husband while watching my children and grandchildren enjoy life.