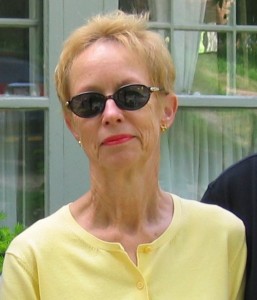 I am a retired diplomat and university professor. In the spring of 2010 I was 65, and had never felt better! I took up exercise seriously several years earlier in preparation for a trip to Antarctica, and kept it up on discovering that I had gained weight over the course of three years while working at a sedentary third career job. I lost the weight, jogging the treadmill every day. I thought it would be good insurance against the heart disease that was rampant in my mother’s family. (My exercise stood me in good stead during treatment – I never missed a day of work and post-treatment I feel great most days despite the various side-effects.)

And then I found a small amorphous lump just inside the anus, almost by accident. There was no pain. Years ago I had a tiny rectal tag removed and I wondered if it was coming back. After a while I realized it was probably not a tag and I called for a colonoscopy. The doctor advised me to go immediately to a colorectal surgeon as he could not remove the polyp for a biopsy without possibly damaging the sphincter. A few weeks later I had the result of the surgical biopsy: a squamous cell anal carcinoma. I had to do research about this cancer, as I had never heard of it – I am not much of an entertainment junkie and did not know about Farah Fawcett until I had my own cancer!

Five weeks later, after consultations at a major cancer treatment center, PET scans, staging the cancer (Stage II), radiation mapping and surgery for installation of the Port-a-Cath, a semi-permanent catheter for the chemotherapy, I began the standard Nigro treatment at a cancer center in my home town – still in a daze. How could I feel so healthy and harbor a cancer? I wondered why I needed treatment, since the cancer had been removed by the biopsy – or so I thought. I had disregarded the word 'invasive' in the pathology report.

The treatment ensured that I felt quite sick at times! Initially the only pain associated with the daily radiation was due to lying flat on a hard 'block' that immobilizes you and presses the end of your spine down, an agonizing procedure for someone like me whose spinal end, the coccyx, turns outward rather than under. The radiation itself is not felt. But by the end of the six weeks of radiation I could count radiation burns, radiation-induced stiffness, vaginal stenosis, fatigue and a kind of radiation cystitis that most patients describe as 'peeing razor blades'. Some of these effects slowly disappeared, but others such as fatigue and pelvic stiffness remain. Four months later, I am still sleeping nine hours a night – to ease the fatigue – and doing stretching exercises to help with the stiffness.

After the first round of chemo, I had nine days of mouth ulcers that were so bad by the end that I could not talk or eat and had to drink my three quarts of water (to flush the chemo) a tablespoon at a time. The chemicals administered had stripped some of my digestive tract’s lining. Twice I’ve been to the hospital to help an immune reaction to a food (dairy) protein that results in hours of vomiting and diarrhea, leading to dehydration and impending shock. I’ve recovered some of the weight I lost but still cannot wear many of my pre-treatment clothes. The Port-a-Cath made it hard to drive until I figured out how to make a soft block that attaches to the seatbelt to keep the belt from pressing on the Cath. The combination of radiation and chemotherapy strengthens the cancer-killing power of each – but also increases the side effects. Long term, I have an increased risk of a new cancer, and of fractures of the pelvic bones; and the cystitis may be a continuing problem.

I do not know how this happened to me. All those years of concern about my heart, and the danger lay at the other end! While I was a student during the sixties, I was too focused on my studies, especially in graduate school to do drugs, free love and all those things that most of us actually never did. I married, and never wondered about his previous partners. No one had ever heard of HPV then! About the point that I began to hear jokes about herpes I married for the second time, twenty-seven years ago. I don’t remember when I learned of HPV, but it was not something that I gave a moment’s thought to. I was a smoker for about twenty years, two cartons a week of Chesterfields at the end. In 1986 I quit – cold turkey – and today even the smell of a cigarette yards away is sickening.

Two months after treatment I had a negative biopsy at the site of the cancer. The follow-up PET scan showed no new cancer anywhere in my body, a huge relief – at least for today. A 'Get out of Jail card' every six months is welcome – but I’d like one every day! I also had a small cyst on my head and the dermatologist decided it should be biopsied, 'just in case'. And then there was the 'ovarian mass' detected by the PET scan, which led to a complete removal of both ovaries and Fallopian tubes – a 'bilateral salpingo-oophorectomy!' Both were full of tumors – but benign. Now we’ll monitor that area. There is always the background uncertainty.

I’ll go about my life, trying to live it every day! I wonder if I will ever know how long the HPV was in my body, waiting. What I can do now is participate in student health awareness programs at the university where I worked, as a kind of messenger about the importance of HPV vaccination now. That’s especially true here in the US-Mexico border region where cervical cancer rates are high and so HPV infection must be high as well. The HPV vaccination is the closest thing we have to an anti-cancer vaccine; it’s not perfect but we can’t wait for perfection.

I want to see the Rear End Club remain a very small society!

I have created a website, www.analcancerhelp.info, to share all the resources, including some humor, that I have found in confronting and fighting this disease; I hope it will help you in your own fight.