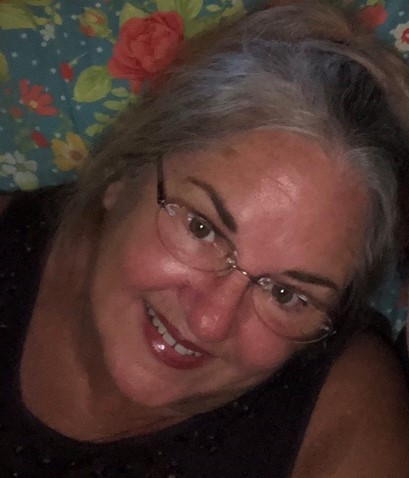 In the Spring of 2009, at the age of 57, I was very much grieving the sudden death of my husband a few months prior, of Idiopathic Pulmonary Fibrosis. I was trying to keep up a good face for my children and grandchildren, overweight and not much exercise. I was a Health Unit Coordinator working as many night shift hours as I could, on a busy Mother/Baby floor in a nearby hospital. 10 years prior when living in another state I was diagnosed with precancerous squamous cells of the cervix. Over the following years I had a couple different GYN procedures and was vigil about my yearly GYN exams. Even had a baseline colonoscopy a few years prior after moving to Florida. I was not at all systematic of the health conditions quietly looming within me.

I should mention one of my daughters is a RN and worked in a GYN office for a couple years prior to becoming a Labor/Delivery Nurse at the same hospital where I worked. She kept me on task and informed. I am told "standard" procedure for a woman over 50 is a rectal exam each year with per yearly GYN appointment. I am fortunate here in Florida to have a GYN who follows that protocol. On that exam in May 2009, my doctor said he felt something and there was indeed, a bit of bloody show. Now I know what he felt was not there a year prior at my exam. I did have one small hemorrhoid seen on my baseline colonoscopy but nothing that gave me much trouble. He suggested a visit to my GI doctor. I guess I wasn't alarmed enough because I had things to do and another daughter and grandchildren coming from out of town to visit and I needed the joy!

I had a colonoscopy on June 27th and things went full speed from there.  I also had a working relationship with my GYN and GI doctor due to the nature of the work I did in the hospital.  Sometimes it is good to call in favors, and a holiday was upon us. My GI doctor gave me a copy of the picture he took before the biopsy he did. It was an ugly little thing the size of my pinky fingernail. He actually thought it might be skin cancer.  That sounded strange at the time.  As promised he called me prior to the holiday weekend and gave me the news, "Squamous cell carcinoma of the anus!" Contributing factor, HPV.  I knew HPV and moreover the television was repeatedly talking up the vaccine for teenagers. More favors called in, needed both a Hematology/Oncology and Radiation/Oncology doctor. As my daughter and I sat with the Hematologist we both seemed in a fog but comfortable in the medical surrounding so listened intently. I was told then in 2009, this Anal Cancer was not very common, and more so not so much in women, however, there was a prescribed protocol that had a 20/80 success rate. I did not panic, but only had thoughts that someone had to be in the 20%. I don't remember hearing the term Nigro Protocol. I was more concerned about my own children and their children perhaps loosing me so quickly after their Dad! So I got things in order pretty quickly. Financially, I needed to work until the very last minute.

I had my mapping for the radiation and felt very comfortable with their plan for 30 treatments concurrent with chemotherapy. I remember vividly, my Radiologist Oncologist (who was a female) telling me to purchase a hand held shower head if I did not already have one.  Funny to remember that, but it was absolutely a godsend! My Hematologist Oncologist didn't think I would lose my very, very long hair, my daughter and I thought otherwise, but it did not matter to me, it's only hair!! I worked my holiday weekend overnight shifts and just before going to sleep them off, I got the call, I was told there was a bed for me. Turned my car back around with my suitcase and onto another floor, the Oncology Floor, I went. I was in the hospital Monday  through Friday with a continuous Chemotherapy drip. It was only interrupted by leaving the floor for my radiation treatments, a quick shower and back to being hooked up. I read a book and watched lots of television, then drove myself home at the end of the week.

I have to digress to say, it was absolutely necessary for my grandchildren to come to the hospital and see me laughing and talking with them. They had to know I was going to come home.  I was also blessed for so many of my coworkers visiting me while I was there. I am not comfortable being the center of attention, but it could not be helped in a place where I was so familiar with so many different faces, from the Phlebotomist, who was shocked to see me in the bed at my 4 a.m. blood draw, to the I.T. guy (with my permission) working on some wiring behind the table in my room, and the environmental personnel dusting the plantation shutters on my windows.  I told my HPV story to anyone who wanted to listen.

By Friday night my tongue looked like thrush. This was not something I was prepared for, I must have missed it in my research! I know weekends are hard to get things done, so I quickly called my Hematologist and told them what I suspected. Medicine for Thrush was prescribed and I got to it immediately. By the next day, my entire tongue looked like the white fat on a piece of beef and I could barely speak as it was swollen and painful. I was mindful not to let it get to a point where it would restrict my breathing. I knew I needed nourishment and found my way through the weekend with a straw.  I would say that lasted the better part of 4 to 5 days. It was hellish and now the diarrhea was starting and I was grateful for the hand shower.  I pretty much resigned myself that I was not going back to work and took a leave of absence.

I drove myself back and forth to my radiation appointments, slightly uncomfortable but not unbearable. I live alone, I did a lot of sitting alone in my house dress with a fan blowing on my radiation burns.  I also used some honey infused cream that had worked on other burns I previously had. That and the Domerboro soaks suggested by my doctor and a minimal amount of pain medicine and I was getting along on the journey. As my hair began to fall out, I was concerned that it would truly alarm my young grandchildren.  I decided not to shave my head, but that as long as there was some substance to pull back in a clip like bun (as they were used to seeing on me in hot Florida) I would maintain whatever hair I had. I would stand out in the yard and brush my hair like your favorite pet!  The children never even commented on the hair loss!! They were more concerned with the mask I would wear in their presence, but they understood all about germs.  When the new hair was growing back in  I still had a few crazy strands of my long hair and I pulled it in a much smaller clip to the back of my head!

Week 5 and back in for a hospital stay and continuous Chemo drip. By now the fatigue was definitely settling in and I was feeling more raw from the radiation burns, but I was more concerned about not having that awful tongue incident the second time around.  It was suggested I chew a lot of ice, thereby having my tongue so numb the same poison killing my cancer would not kill my tongue.  Oh my did I chew ice, my dentist would not have been happy. On the plus side it kept me even more hydrated than I usually am! My tongue was not nearly as bad post second round of Chemo. My blood count was low and at one point I did have to have some platelets transfused after that second round of Chemo, fortunately my son had come to town to keep me company and drive me back and forth for the last few radiation treatments.

I never had to deal too much with nausea and even the diarrhea was controllable, but I spent hours in the hot Florida heat sitting on my porch with a blanket, because as a person who lives with her A/C 360 days of the year, I could not get my core warm!!  It took several months for that to disappear.  And for the better part of the next year, I always felt like my urine smelled so pharmaceutical! I also had a couple of weeks following the last Chemo treatment where the arm where it had been administered, had no strength and slight pain.  I would not trust myself to pickup up anything of weight until that normalcy returned. My hair grew back with some wave to it and thick and healthy as ever.

My biggest frustration over these years has been the fatigue that has never left this once Engerzier Bunny. My hips have started bothering me the last couple of years (I know now that is not an uncommon side affect). Also stiffness in my fingers and occasional neuropathy nerve pain in a couple of my toes. I have also started having Vertigo bouts the last couple of years. No explanation why, but enough to keep me more on guard.

I was a widow, still am this many years later, I can't speak for the vaginal stenosis or any other sexual issues.  I will say I never thought my sphincter was a tight as it once was, and there was a mucous discharge for a couple years after my treatments. More recently, in the last year or so, I feel my sphincter is failing me more.  I am not a doctoring kind of person, but  these frustrations would now and again finally beg for an MRI or other scans.  I have maintained my same GYN, GI and Primary doctors over these years, but everything is pretty much diagnosed as arthritis.  I have my own thoughts.

8 years later post cancer, I am retired now, 6 months, and trying to get my mojo back, exercising as much as I can and taking an overall holistic approach to how I can live with whatever side effects I have from keeping my life.  I know this has been a long read, but I was trying to include the good, the bad and the ugly.  I am a very positive person and very faith filled.  I am grateful to be alive to enjoy my family, and them me.

I came to this site just in the past several months, but feel a kinship with other Thrivers!  I feel fortunate to be here to share my story and I feel strongly there must be more proactive education to the HPV Disease and the many different cancers attributed to it. Thank you for your work and this forum.